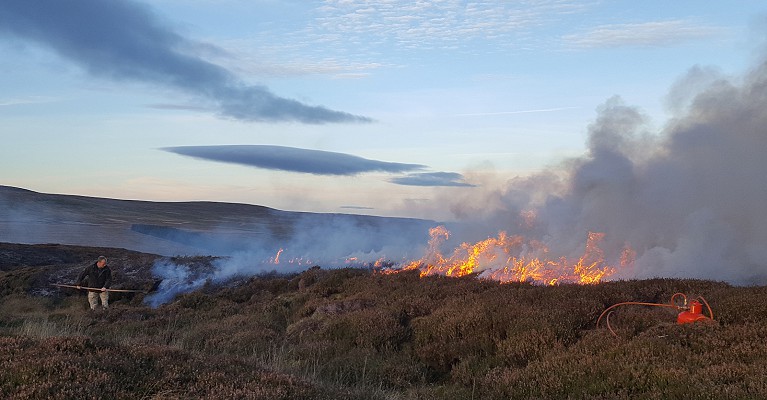 Natural England have moved to 'ban' rotational burning on blanket bog severely restricting landowners' ability to effectively manage vegetation in the uplands. The reasons behind this move are complicated but contain a significant political aspect. The RSPB have been pursuing a complaint against the UK government in the EU courts involving the burning of vegetation on SSSi ( Sites of Special Scientific Interests. Technically it is still possible to restoration burn but the assessment, pre planning and post burning reporting involved in order to qualify for consent to burn are so extreme as to render the practise unworkable.

It is ironic that a practise carried out over hundreds of years responsible for the creation and maintenance of an ecosystem so revered is now fashionably considered to be damaging to the environment. Almost all the science points towards the tremendous net benefit that responsible upland burning can provide. There is very little scientific evidence to show significant negative impacts over the medium to long term.

The main benefits of cool rotational burning are:

The huge wildfires that hit the news last summer started not on Grouse Moors but on NGO managed land where there had been a recent historic absence of burning to control vegetative fuel load. The fires burnt for so long and with such heat they tore through into the pete layer setting the very ground on fire. It will take many years if not hundreds of years for the ground to recover as not only the vegetation but any seed bank will have been destroyed by the intense heat. In the meantime any exposed pete that remains will likely be lost due erosion and oxidisation.This is a sad result when a descent program of controlled rotational burning would have prevented the problem in the first place. Its is ironic that the cessation of burning on these NGO managed areas was justified by the organisations as a means of protecting the pete!

We are under no obligation to abandon fire as a tool at Coverhead, the ground being non designated (not an SSSI) and due to leave a HLS scheme in the winter of 2019. However we have been actively looking at alternatives to keep ahead of any possible sweeping legislation. We are already trialling cutting and cattle grazing techniques. The cattle grazing option shows promise in managing and maintaining a diverse sward but is capital and labour intensive. The use of GPS training collars for cattle is a possibility and we await the release of a New Zealand product currently in beta testing which might allow us to control grazing on the hill when and where we need it without the use of unsightly and inconvenient fencing.